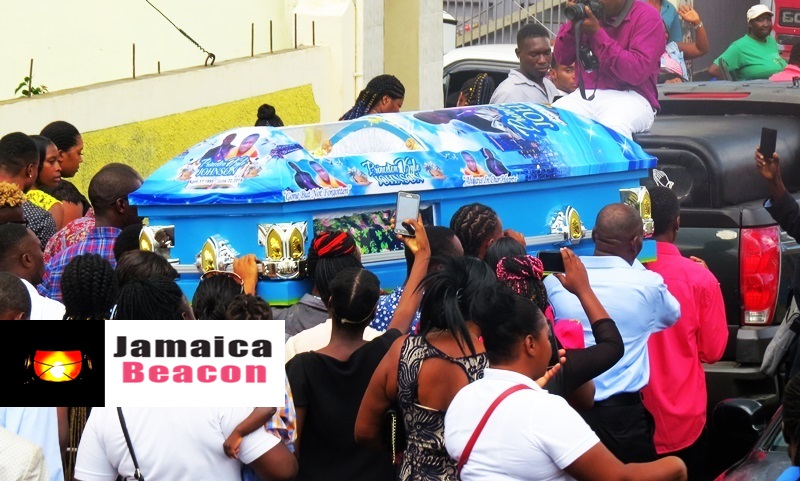 It’s a route they didn’t have to take, but they took it anyways.

A group of pall-bearers on Saturday, August 3, carried the casket bearing the corpse of Princeton Johnson to the exact location where the 24-year-old was shot dead by a cop in the heart of Kellits, Clarendon.

People watched from buildings and roadsides as the spectacle unfolded. Some jostled for the best vantage points to capture the moment on camera.

The procession, in the meantime, carried an atmosphere of partying and grief.

There was anger at one point when, en route from the town centre to the family plot in Kellits, mourners met face-to-face with police, who have been getting a flak since one of their colleagues killed Johnson.

Avoiding a clash, the police officer behind the steering wheel reversed the pickup van and gave the mourners free passage.

There wasn’t much of a free passage, however, at Johnson’s grave-side. Two weeping men, at different points, used their bodies to prevent the casket from being placed into the grave.

One of them eventually made his way into the grave and had to be pulled out and pulled away.

While mourners were at the family plot, explosions emerged from the direction of nearby bushes.

They sounded like the deadly gunfire that rang out in the usually quiet town of Kellits on the night of June 22.

There are conflicting versions of how Johnson was shot dead, but a toy gun subsequently was found in his waistband.

During the funeral service inside Kellits Church of God, speaker after speaker said Johnson was not a criminal. They said he didn’t deserve to be cut down.

“I am very proud of what I see here today; Benji get a state funeral,” the employer further said.

Former Mayor of Port Antonio, Bennie White, in the eulogy, gave an insight into the life of Johnson.

He stated that his slain nephew-in-law was born to Beverly and Emanuel Johnson at Spanish Town Hospital in St Catherine on 17 April 1995.

Johnson, who has a young son, is said to have been a lover of children.

He often accompanied his niece, Sheanelle Brown, to school.

Johnson did a web design course, and was enrolled at the state-owned Kellits Skills Training Centre, where he studied Construction. He was a regular participant in the Northern Clarendon Summer Camp.

“He was a splendid individual, filled of vigour and fun, and a lot of friends. His noble personality allowed him to be the centre of attraction among his friends,” White said, adding that Johnson loved football and was an aspiring recording artiste. Johnson was employed to Kellits Party Rental.

We don’t get salaries | Linstead band serving from before Independence

Hard work pays off for boy from Spanish Town