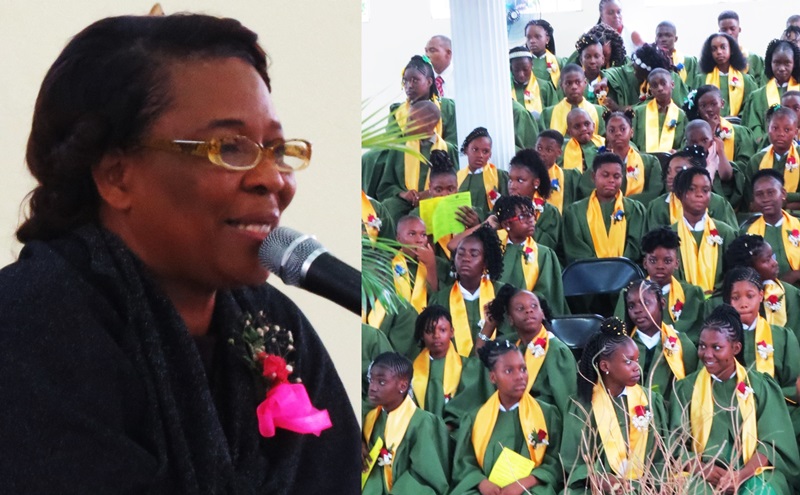 Principal of Ewarton Primary School in St Catherine, Malgalyn Clunis, yesterday expressed hope that Jamaica is making special preparation for the latest batch of graduates, adding that the students are now critical thinkers and are even brighter than their teachers.

She made the comment while indicating that the recently implemented Primary Exit Profile (PEP), which facilitates the placement of students in secondary schools, has boosted critical thinking among students.

Clunis declared: “One of the things we learnt this year is that teaching children to be critical thinkers is risky. Why it is risky? It makes students brighter than the teachers and their professors.

“We called the Ministry of Education to verify questions because our students have become brighter than us,” she further posited during the school’s graduation exercise held at the Bread of Life Ministries, located near Linstead Fire Station.

Clunis told the gathering that, although the school is still conducting a comprehensive assessment of its PEP results, it is pleased with the performance of its students.

Students, under PEP, are assessed in four subject areas – Science, Mathematics, Language Arts, and Social Studies. Their individual performance is eventually ranked on one of four levels – Beginning, Dveloping, Proficient and Highly Proficient. The highest rank, Highly Proficient, is sometimes also referred to as Advanced Proficiency.

Clunis told the audience that, based on the PEP results received, Ewarton Primary can proudly declare the following:

Clunis explained that, despite days of discouragement and doubt, her teaching staff put much effort into preparing some 200 students for the inaugural sitting of PEP at Ewarton Primary.

“The purpose of our team was to do everything that was possible to put our students in the best position so that history would recall that they were not disadvantaged,” she further said.

Clunis, along with other speakers, challenged the graduates to continue aiming for success as they move into secondary schools and beyond.

Past Student of Ewarton Primary, Karen Reid, who chaired the ceremony, joined in speaking highly of PEP and in encouraging the students.

“What you do speaks for your school, so do well everywhere you go. Shine and shine brightly because Ewarton Primary is depending on you to take the torch one dream at a time wherever you go,” she said.

A similar advice was sounded by the guest speaker, Christopher Reynolds, who also is the Education Officer for the Ministry of Education’s Region Six.

“Be the change that you want to see and let the change begin with you,” he implored the graduating class.

Reynolds also called on parents to play a more active role in their children’s education whether or not they are academically inclined.

In the meantime, Councillor for the Lluidas Vale Division in St Catherine, Hugh Graham, who spoke on behalf of Member of Parliament Robert Pickersgill, used the opportunity to encourage students to develop a culture of giving – not just material things.

“Start the habit of learning to just find something to give back – whether it is a good heart [or] a good cheer or just a good spirit; not the venom and the toxic environment that some of us tend to foster,” Graham said.

He further noted that he employs some 200 people and, in recruiting them, he partly focuses on whether or not they are willing to share with others.