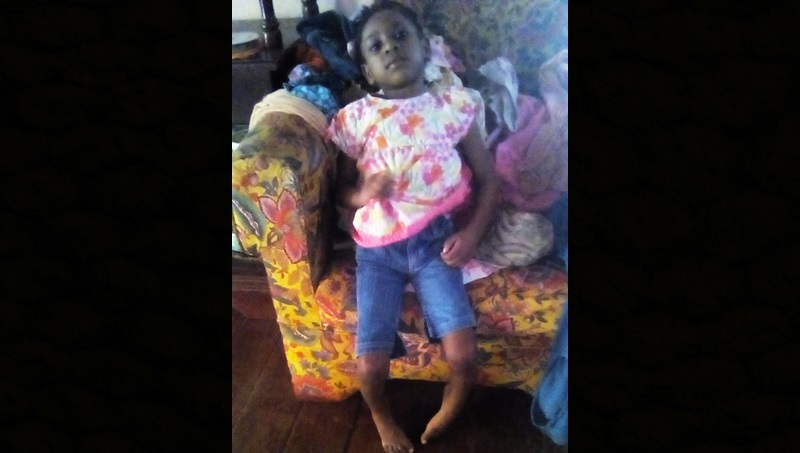 Tasheka Lewis, five years old, has missed her latest medical appointment despite the mystery that appears to shroud her illness.

Her mother, 23-year-old Tracey-Ann Williams, told The Beacon that the child suddenly stopped talking and walking some time between December 2017 and May 2018 while she was spending time with her father in the Corporate Area.

According to the mother, who said she lives in Mandeville, the child, almost six years old, has to again resort to wearing diapers and being spoon-fed.

“She can’t feed herself; I have to feed her. Sometimes when I feed her she use her tongue to push out the food,” the mother said.

She claimed that she took the child to the Bustamante Hospital for Children in Kingston on three occasions and, on each, she was given different explanations for the condition.

The first explanation was that the child had seizure, the mother said, adding that she doesn’t immediately recall the other technical terms.

She disclosed that she eventually was instructed to take the child to a therapist last month, but she missed the appointment because she did not have enough funds.

She, in the meantime, claimed that the child has not received any support from her father since he gave her a birthday gift in September last year.

She added that it is not unusual to leave the child with the father for some five months, adding that the dad used to be highly responsible.

The mother claimed that the father’s attitude changed since he allegedly impregnated another woman. “He was a responsible father. He kept her even longer than that (December to May). In the last half when I sent my daughter off to stay with him, I heard that he got somebody pregnant.”

Williams stated that, while the child was still with her father in February 2018, the father told her that the baby was admitted to hospital.

“He said she was admitted to the Bustamante Hospital. When I leave from here (home) and reach Spanish Town, I told the father I am on my way [to the hospital], but he told me the baby already come out of the hospital.”

The mother told The Beacon that, after she collected the child in May 2018 and took her to Bustamante Hospital after noticing that she was ill, she was informed that the baby was never admitted to the medical facility.

She said the father has been elusive, and has described her as being ‘careless’.

The mother, in the meantime, declared that she is not ruling out witchcraft; she isn’t ruling out anything in relation to the possible cause of her daughter’s surprise illness.

She said she never brougth the matter to police attention because she didn’t have any ‘backative’ and people were telling her that the child would have recovered.

“She is getting worse and worse,” added the mother, who has two younger children with a different father.

The Beacon, in the meantime, has been trying to contact the father of the ill child to get his side of the story, but those efforts have been futile. The child’s mother said she doesn’t have a telephone number for him.

Too many ‘dunce pickney’ in school, education officer laments