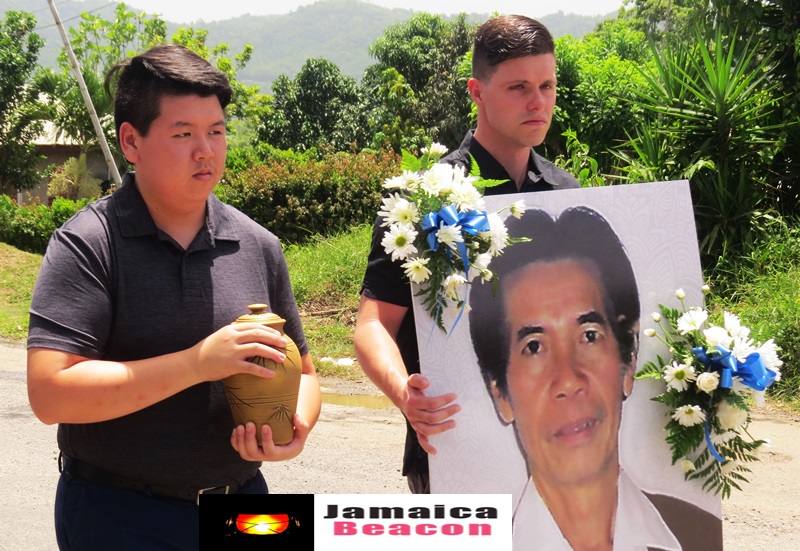 A number of residents yesterday morning descended on Saint Peter’s Anglican Church in Lluidas Vale, St Catherine, to show their last respect to a businessman who is said to have struggled to become owner of a two-storey commercial and residential building in the heart of the small town.

The entrepreneur, Daniel Chin, died in hospital on 9 June 2019 after a period of illness, leaving wife Lilly Chin and three adult children – Carly, Silvien and Kenny. He was 71.

Throughout the proceedings at the church, located almost in the town centre, members of the relatively small family maintained composure. At one point, they even facilitated photo ops with area residents.

Silvien told The Beacon that the cremains of her father, whom she said was born in St Ann parish, will be interred in the United States. “His cremains will be taken to Miami with us (his children) and that is where he will be interred,” she disclosed.

Meanwhile, Silvien, in the eulogy she delivered, said very little about the life her father lived prior to coming to Lluidas Vale in 1988 and later rising to become owner of the property where he initially was a tenant.

“Daddy came from humble beginnings,” she told the congregation. “Through his personal struggles with life on his own before he met mom, he worked odd jobs before he established himself in the small town of Lluidas Vale. Daddy began his business here in Lluidas Vale in the year 1988.”

Mr Chin eventually expanded the business and rehabilitated the buildings.

“For anyone who remembers, we started in a very humble and small zinc house that provided enough shelter for both mom and dad,” Silvien said.

“When my older sister Carly – or Galee as most know her – came about, my parents worked extremely hard to grow their business and to begin building from there. As the years passed, my parents began slowly renovating and have established where we are today.”

Silvien further stated that her father was not a man of many words; he was big on action.

“Growing up, Daddy wasn’t ever too hard on us. He always played the more relaxed parent, but there were days when he was quite stern because he needed to be. He was both stern and lenient at the same time. He knew how to balance the difficulties of being a father. He was a provider, a caregiver, a life partner, business partner and most importantly, the original Mr Chin from Lluidas Vale.”

In the meantime, Horace Stone, in a tribute, told the congregation that he was very close to Mr Chin, especially during his early years in Lluidas Vale. At the time, both of them lived on the same property that the Chins now own.

Stone recalled accompanying Mr Chin to various places across the island and also transporting his children to school in Linstead, St Catherine.

He told The Beacon that his family also benefited from Mr Chin’s generosity. “He is a kind gentleman – very kind. Almost anything you asked him to contribute to in the community, he did it,” Stone further said.

Other persons who took part in the funeral service included Nicola Bell-Wright and Walter Eastwood who read the scripture lessons, as well as Brittany Newton and Reverend Cheryl Phillips.

Meanwhile, Mr Chin’s relatives, at the end of the relatively short funeral service, proceeded to their business-place and home located virtually across the street from the church. Kenny carried the jar that bore his father’s cremains; another relative carried a life-size portrait of Mr Chin.

The relatives, moments after placing the cremains on their private property, joined area residents for food and drinks in the public park in front Mr Chin’s business-place. The people in attendance included Councillor for the Lluidas Vale Division Hugh Graham, as well as a number of Mr Chin’s current and former employees.