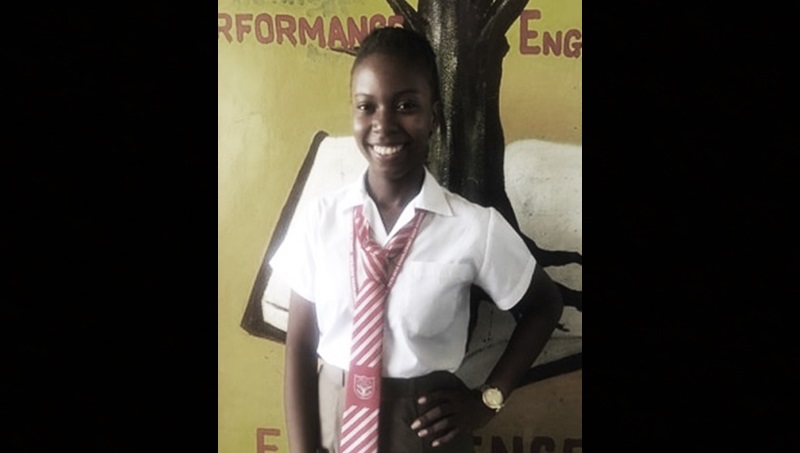 A few months after she was seen weeping in Commodore Cemetery while her murdered mother Verona ‘Trudy’ Slack was being laid to rest, Ashanti Blackwood is celebrating an academic feat, which she has dedicated to her mother.

The native of Linstead in St Catherine was successful this year in 8 CSEC subjects, administered by the Caribbean Examination Council (CXC).

Those subjects are Biology, Physics, Principles of Business and Theatre Arts – all in Grade Ones, as well as Additional Mathematics, Chemistry, English B (Literature), and Social Studies.

Ashanti previously attained three other CSEC subjects – including English A and Mathematics – in a single CXC sitting. She also holds two subjects in City and Guilds exams.

Ashanti, a past student of Jericho Primary School in Linstead, is now enrolled in the sixth form programme at her alma mater – Charlemont High School.

She, in the meantime, represents Jamaica in several international chess tournaments.

At the 2019 Carifta Chess Championship in Curacao, she won the Under-18 category and finished second in the Under-20.

Ashanti was scheduled to visit Honduras this month to again represent her island home in chess.

She intends to continue donning the Jamaican colours after sixth form.

“I will continue to play chess as it helps me to ease my mind; it also helps me academically; it is really a game I like to play,” she told The Beacon.

Ashanti, in the meantime, said she is immensely grateful to the people who rallied around her during the toughest time in her life – the death of her beloved mother.

“After the passing of my mother, people encouraged me to not give up, and told me that I would excel no matter what my situation is,” she declared. “I also want to make my mother proud in everything I do, so there was no question about doing well or not in my exams.”

Ashanti encourages other students to always seek help whenever they are in need of academic assistance.

“Be around persons who will inspire you to do well and make you smile even on the days when you are down,” she further advised.