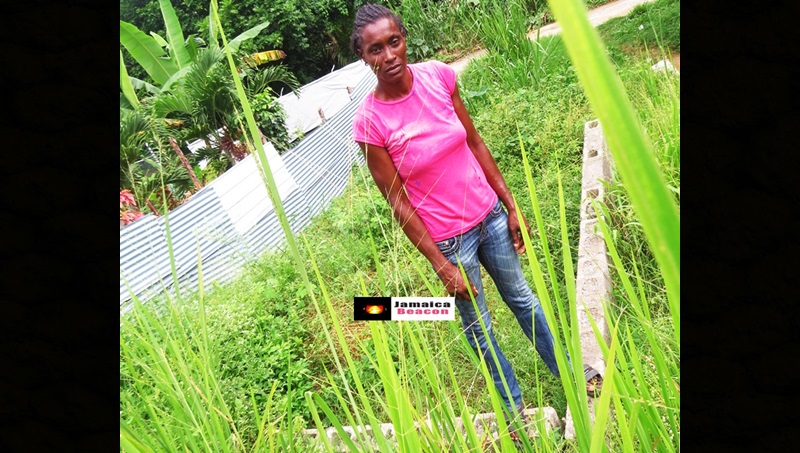 Residents of Nugent Road in Ewarton, St Catherine, joined forces a few months ago and laid the foundation for a relatively small house, which will be donated to the virtually homeless Karen Oliver, better known as Keisha.

The residents, however, had no clue that completion of the house would have become a matter of urgency until Sunday, June 9, when Oliver had a mind-boggling encounter. The floor of the leaky wooden house where she lived for some four years partially collapsed.

Her life would be in danger if she remains in that structure for which she said she pays a monthly rent of $2,000.

Oliver is now living at the mercy of some hot-tempered women, who live on the same property, but in a different wooden house.

The women were overheard threatening to throw her belongings off the property.

They are outraged that Oliver took people into the yard to take photos of the collapsed floor, but Oliver said she did so only to give credence to her desperate appeal for assistance.

Oliver, whose temperament seemingly contrasts that of the other women, is not originally from Ewarton, but she has called there her home for several years. She is a native of Garden Hill district, not far from Point Hill, St Catherine.

Oliver is grateful that kind-hearted residents of Nugent Road, Ewarton, have given her a start by partially building the foundation of a house.

One resident, who is wheelchair-bound, donated the relatively small parcel of land on which the structure is to be built.

Oliver now turns to the public for urgent assistance with zinc, cement, plyboard and other material. “Anything you can afford to give me, I would appreciate it,” she said.

Oliver, who also is seeking a full-time job in or around Ewarton, told The Beacon that she has been struggling financially because she ekes out a living by washing people’s clothes. “Sometimes I don’t have any clothes to wash and so I don’t work,” she added.

Oliver, in the meantime, is the mother of six children, with the eldest being a 15-year-old high school student.

Three of the children live with Oliver, who indicated that most of the fathers are deadbeats.

Oliver is now desperately seeking a better life for herself and her children – starting with a comfortable place where she can call home.

CLARENDON: Taximan among 2 shot dead at shop; two others injured