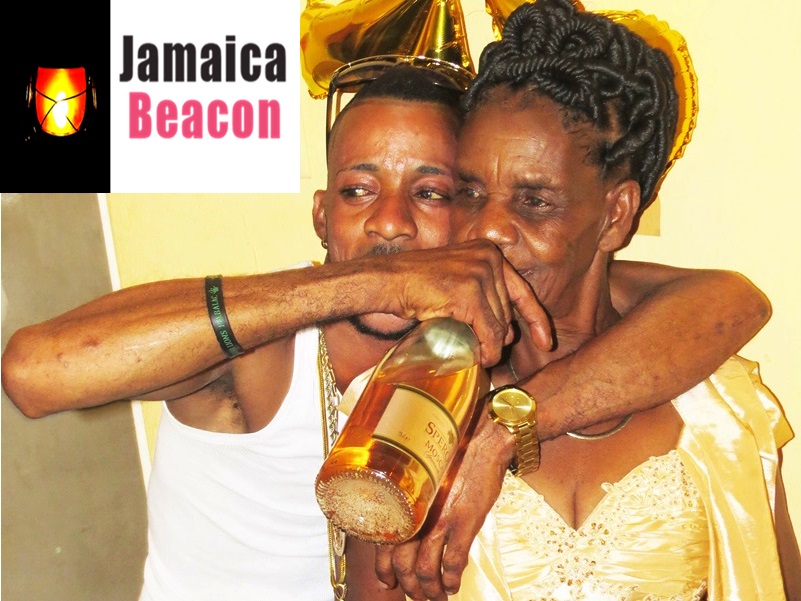 Despite putting her best investigative skills to work, Joyce Wilks did not detect the birthday party that was being hatched for her in Top Hill district, St Catherine – close to the Clarendon border.

“It was a surprise to me,” she told The Beacon. “I know they were doing something, but I think they were just going to give me a drive out.”

Miss Joyce further stated that the party is the first one she was experiencing since birth 75 years ago. It was conceptualized by her daughter Jennifer Patterson, and organized by another daughter – Tanesha Henry.

“It was a good party; it was good,” Miss Joyce declared; her voice still filled with excitement the day after.

The event, in the meantime, pulled an estimated 100 guests, who partook of scrumptious meals, socialized, and soaked up the music that blared from a tiny sound system set up along the roadway.

Miss Joyce, beaming a broad smile, eventually cut her birthday cake, which had an image of her on the top. Her daughter, Jillian Patterson, who celebrated her birthday the previous day (July 11), helped to cut the cake.

Mario Sinclair took the lead in the toast segment, describing his grandmother as the world’s greatest.

“When I was young and the rain fall, and I have to come off the hill [from our house], my grandmother used to wrap me in towel and bring me to school so I could achieve something…” he told the gathering, adding: “I love her dearly and I would do anything for her!”

Meanwhile, Margaret Martin, one of Miss Joyce’s sisters, promised to always stand by the ‘birthday girl’.

Tajari Rose, a grandson, performed a poem in honour of his grandmother, Miss Joyce. He has won a whopping 17 gold medals in competitions hosted by the Jamaica Cultural Development Commission (JCDC).

Miss Joyce got more commendation when a member of the community, Charmain Bair, in her turn at the microphone, described the lady of the moment as her second mother.

“She is the mother of most of my brothers and sisters, and she has never treated me any less than her children,” Bair declared. “Miss Joyce always treat me like a daughter; I always love and respect her; and there is nothing that I wouldn’t do for her.”

Miss Joyce, who worked as a domestic helper to raise her 11 children, told The Beacon that, amid the celebration, she eventually would like to be remembered for her kindness.

“I want people to remember me by what I did to them; how kind I am to them,” she said.

Miss Joyce, a few days before her 75th birthday, was also singled out for praise while she sat in a graduation exercise at Top Hill Primary and Infant School.

Chairman at the event, Fitzroy Bennett, lauded her for a kindness she showed umpteen years ago when he just started high school, and could not afford his school uniform.

Bennett recalled that Miss Joyce gave him the uniform she had bought for one of her sons, because he (Bennett) was a far better academic performer.

Bennett, who is now a member of the Jamaica Constabulary Force, said he is not encouraging other parents to do what Miss Joyce did.

But he noted that Miss Joyce’s action was selfless, adding that it captured the essence of when communities once raised each child.

From makeshift table to tennis champion, St Mary’s All Age

Corliss is back | Philanthropist brings cheer to children in Top Hill