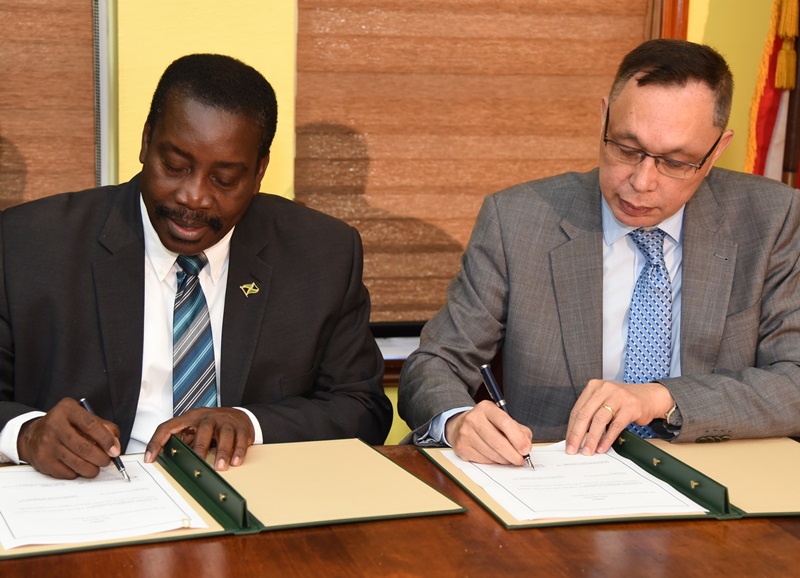 Jamaica Information Service – Jamaica and the United States of America have revised their Open Skies Air Transport Agreement to further strengthen the aviation partnership between the two countries and deepen commercial and economic ties.

Under an amendment signed on Thursday (May 10), the Governments have agreed to allow all cargo airlines from their respective countries to continue to third country destinations without having to return home first.

This amendment is expected to enhance business connectivity for Jamaica and the United States.

Minister of Transport and Mining, Robert Montague, in his remarks at the signing ceremony at the Ministry’s Maxfield Avenue offices in St. Andrew, noted that air services agreements smooth the progress of international and commercial air transport between territories.

He said Jamaica has signed such agreements with 29 countries and is actively pursuing alliance with various others.

“Indeed, our desire for strengthened bilateral relationship between the United States and Jamaica is the basis for this amendment agreement today, and arose from negotiations at the 2017 International Conference on Air Services Negotiation held in Colombo, Sri Lanka,” he said.

Minister Montague noted that air transport is a driver of growth, and the Government is continuously seeking ways to increase connectivity through the Open Skies Policy.

The policy aims to encourage competition and expansion of international air services and provide an open environment that will encourage operations into Jamaica’s airports, facilitating the development of Jamaica’s international trade, investments, tourism and all sectors of air transport.

It also provides liberalised criteria for designation and code-sharing among airlines, and the creation of balanced links and access with CARICOM and non-CARICOM carriers/operators.

Chargé d’Affaires of the Embassy of the United States, Eric Khant, who signed on behalf of his Government, said that expanding open skies agreements is a key part of United States strategy for engagement in the Caribbean, creating an environment where greater growth-inducing commerce can take place.

“Our aviation partnership with Jamaica has always been robust and mutually beneficial, so we (are) augmenting that partnership today,” he said.

Mr. Khant said as the Government of Jamaica works to build the nation as an intermodal logistics hub, this amendment will attract many new air carriers to the market, allowing them to operate from Jamaica as they serve the region and beyond.

He said several other countries in the region have already signed the agreement, including Barbados, Grenada, St. Kitts and Nevis, St. Martin, St. Vincent and the Grenadines, and Trinidad and Tobago.