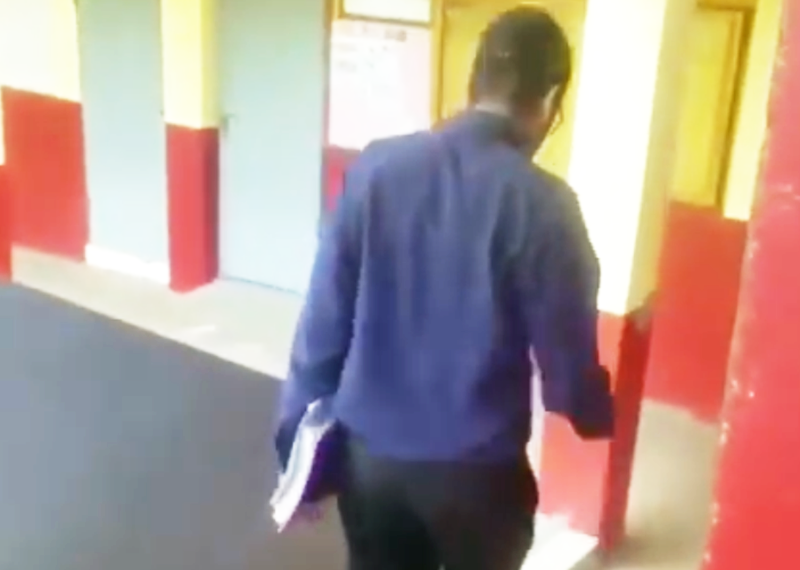 At a time when the administration of Charlemont High School is busy covering up the punishment meted out to a group of students who fought in the streets last month, it is again being hit by another widely publicized case of indiscipline.

A video released yesterday, shows a group of female students insulting a male teacher, with one even spitting expletives at him.

The undated video was recorded on a staircase at the school located in Linstead, St Catherine.

The recording starts with two girls jostling for a spot to sit on the staircase.

“Over blo$#$cl$$%t spot dem a fight over,” said a female student observing the jostle while apparently videotaping the scene.

A male teacher, heading down the staircase, appears on the scene. He stops for a short time while the girls ridicule him.

As the teacher walks away, the student apparently videotaping the scene blurts out: “Bumb$#$$cl$$%t. Sir, gwaan, yuh frowsy like!”

The teacher continued to walk down the staircase without responding to the insults.

The video has gone viral on social media since being posted.

It is the second video to be publicized widely within weeks regarding indiscipline among some Charlemont students.

The previous video shows two groups of girls fighting near the school last month. One of the fighters ended up being hospitalized.

Usually reliable sources have told The Beacon that nearly 10 of the fighters have been expelled.

However, embattled Principal, Garth Gayle, when contacted yesterday, declined to comment on the disciplinary action taken against the fighters.

Several phone calls to the Chairman of the school board, Professor Colin Gyles, are being unanswered over several days. The only time Professor Gyles answered the phone was on the first occasion when The Beacon contacted him last month.

Members of the school community have been expressing concern about the school board’s silence and seeming nonchalance regarding a series of events affecting the educational institution.

Charlemont High also made the headline last month when a female student slapped the Dean of Discipline in the face on the school compound. That incident unfolded a day before the aforementioned street fight.

At the time the forgery was discovered, the school’s principal, Gayle, came under fire especially from the Charlemont High School Past Students Association, headed by Onenetta LaBeach.

Labeach had claimed that Gayle was a poor leader who was missing from the institution too often. Gayle, however, denied the allegations.

Charlemont High, once the most prestigious and sought-after institution arguably in Linstead, has been having a massive problem with indiscipline, but its leadership insists that the academic performance has not slipped.