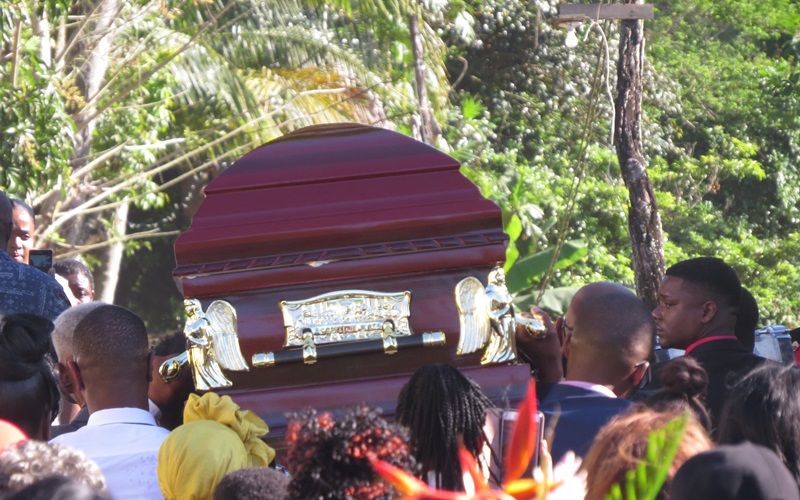 Men did most of the crying at Mountainside, St Elizabeth, where a relatively large crowd gathered to say farewell to Mabel Brown-Gordon on a sun-drenched Saturday afternoon, April 13.

The 104-year-old St Elizabeth native, who died peacefully in St Andrew on March 17, was described as a prayer warrior, an ambassador for peace, a woman who wore no mask, and a stickler for traditional values.

Her granddaughter, Michelle Shaw, who delivered the eulogy inside Brooklyn Church of God of Prophecy, said Brown-Gordon, for example, believed that ‘the woman was responsible for the upkeep of the house’. That view, of course, did not go unchallenged by the younger women of her lineage.

She was a member of the Windrush Generation, which left Jamaica in the 1960s to seek a better life in England.

“She arrived [in England] with great hopes and dreams based on promises of work for good wages. Needless to say, this was not the case, and hard graft continued,” added the granddaughter.

She stated that Brown-Gordon did an auxiliary job for many years at Bolingbrook Hospital before she returned to Jamaica in 1983.

The centenarian, in the meantime, was also eulogized as a firm believer in the extended family. As a result, her home – whether in England or in Jamaica, ‘became the place to lay one’s head, stay for a while, and visit during holiday seasons,’ the granddaughter said.

Brown-Gordon, who was born in Schoolfield, St Elizabeth, on 2 October 1914, had four siblings. The only one still alive is 100-year-old Vita Honeywell, who, during the funeral service, sat in a front pew.

Brown-Gordon is predeceased by six of her nine biological children, as well as her husband Charlie Gordon, who hails from the Lluidas Vale area of St Catherine. She has 21 grandchildren, 66 great-grandchildren, and 42 great-great-grandchildren. Many of those relatives participated in the funeral service – especially during the floral tribute.

Corrine Robotham VLosic, in remembrance of her grandmother, told the congregation: “There was no fakeness about her; she did not wear a mask… I hope I will turn out to be half the woman that she was.”

Similar sentiments also came from Joy Thompson, who, for decades, was one of Brown-Gordon’s neighbours in Duhaney Park, St Andrew. She declared that Brown-Gordon ‘was one of the best neighbours’.

In the meantime, one of the centenarian’s great nephew, Kirt Peart, said Brown-Gordon died with a smile. “She was a decent lady; she left with a smile on her face,” he told the congregation.

Peart also finally released the tears he said he had been holding back since the day Brown-Gordon died. Another crying young man, Craig Dennis, promised to carry on his great-grandmother’s rich legacy of peace and love.

Clarendon to get more police vehicles this week amid ‘serious deficit’