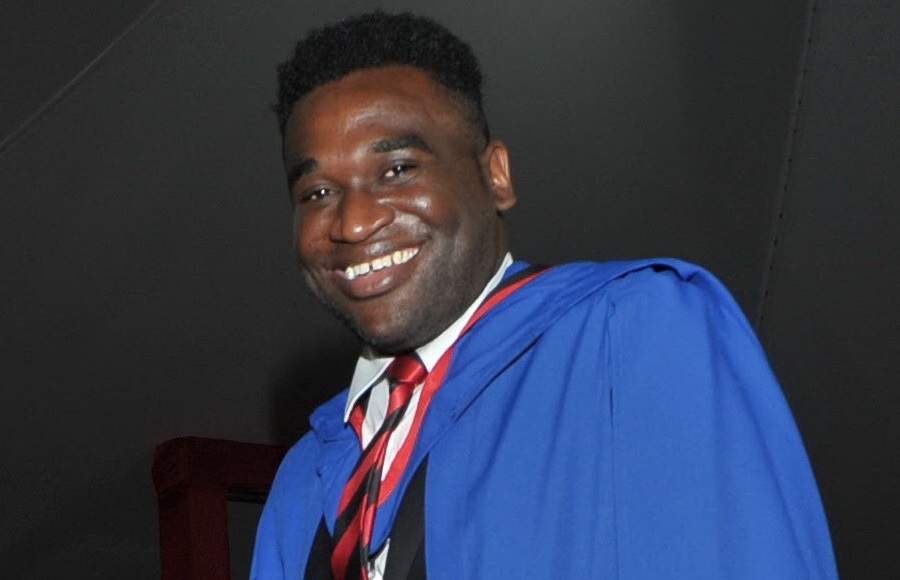 The past four years have been academically grueling for Zurie Johnson, whose fear of disappointing his deep rural community partly pushed him beyond his perceived limitations to complete Norman Manley Law School last week Saturday, September 28.

The 31-year-old past student of Keith All Age School, York Castle High, and Ardenne High School hails from the community of Thicketts, located six miles above Discovery Bay in St Ann.

Regarding the pursuit of his law degree, Zurie said: “The period became a battle not only for me, but for a very rural community hidden in the hills of Dry Harbour Mountains, Thicketts. In Thicketts, we are not exposed to many of the opportunities that are afforded to others, yet our limitations are only those we place on ourselves.”

Having attained his Certificate of Legal Education at Norman Manley Law School, Zurie is now waiting to be called to the Bar – essentially to be given the green-light to start practicing as a lawyer.

Beating all odds to graduate from law school is, by itself, worthy of celebration.

“I never felt like celebrating until that moment I walked across that stage [at graduation last week],” Zurie said.

He continued: “I realized that despite losing my mother, my car being stolen, a long and tedious search to find somewhere to live, and an employer that fought me along the journey and issued letter for me to stop going to school with immediate effect, and no clue where funding would come from, I was done. It was finished, and no one could take the moment from me.”

Zurie wasn’t always interested in becoming a lawyer. He gradually developed a passion for law while on the job at JPS & Partners Co-operative Credit Union.

“I was really curious as to what protections the law offers to individuals, and how these protections can be exercised,” he told The Beacon.

“I had never questioned my intellectual capabilities as much as I did in the four years [studying law]… I had to learn to trust in myself and my abilities, and truly learn that I am worth it and my journey is much bigger than myself.”

Zurie was always an academic heavyweight.

In 2008, he attained a Bachelor of Arts degree (First Class Honours) in Media and Communications from CARIMAC – University of the West Indies. He was valedictorian at his graduation.

“All my life I wanted to be a journalist, work in media, be a playwright or author. Law was the furthest thing from my mind,” Zurie said, adding that he is still employed at JPS & Partners Co-operative Credit Union, but he hopes to eventually make the transition to law practice.

He is elated that his father, Texal Johnson, is still able to reap the returns on the investment made in education.

His mother, Catherine Johnson, however, died of pancreatic cancer in February 2016. Zurie, at the time, was a first year law student at the University of the West Indies.

In the meantime, Zurie reasoned that, throughout the years, his academic journey has taught him a higher level of self-consciousness, which other people should strive to attain.

“It is very important to know who you are, because there will always be others trying to define you,” he said. “I learnt to measure my success against me. If no one else celebrates me, I have truly learnt to celebrate myself.”

PHOTOS: How a neglected drain is damaging a stretch of road in Lluidas Vale Division