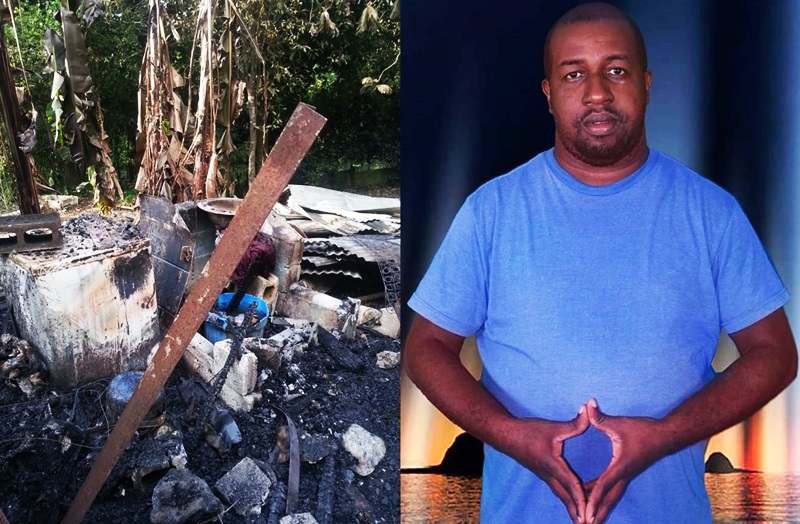 A taxi operator from Banbury district in Linstead, St Catherine, is now pondering his fate after fire badly damaged his house while he was busy making preparations to bury his mother Rescella Douse on Saturday, September 14.

Kirk Douse, whose birthday will be on Sunday, said the house went up in flames on September 8 after he cleaned up the property and was burning the garbage that had been collected.

He eventually fell asleep. “I went to sleep and left the fire [burning the garbage], thinking we have it under control,” Douse told The Beacon.

He said he was awakened by one of his cousins who was helping him to clean up the property.

“He came to my room door and knocked it and told me about the fire. I panicked – running to and fro. When I got the hose and water, it was too late,” Douse recalled. “I had to hit out the window to actually go inside the front room to get a few important documents out.”

Douse theorized that the fire from the garbage seemingly made contract with a plywood bathroom located at the rear of the house.

He said personnel from Linstead Fire Station are continuing their investigation, adding that they visited the scene on the day of the blaze.

“I think they came within good time, but the whole place got engulfed quickly,” Douse added.

He explained that the fire affected the entire house, which comprised two bedrooms, a living room, two bathrooms, and a kitchen.

They were all gutted.

The items destroyed include a television set, a refrigerator, a gas stove, two beds, a wardrobe, a cabinet and other pieces of furniture.

Douse told The Beacon that the damage is a major setback especially at a time when he will bury his mother with whom he shared the house. He is now staying with relatives.

Here are some photos mainly of the damaged house:

About the author: Horace Mills holds a B.A degree in Media and Communications from the University of the West Indies (CARIMAC). He worked as a freelance writer at Teen Herald while in high school, as a Senior Reporter at The North Coast Times, as Journalist and News Presenter at IRIE FM, and as Editor of a leading news publication in the British Virgin Islands – BVI News. Mills also served as Editor of The Eagle, published by Charlemont High School where he was Head Boy. He is recipient of various awards including the FairPlay Award and the Prime Minister’s National Youth Award for Excellence in Journalism. Mills is a stickler for fairness and accuracy in journalism.

Man charged with murder of taxi driver, wounding of four others in Westmoreland