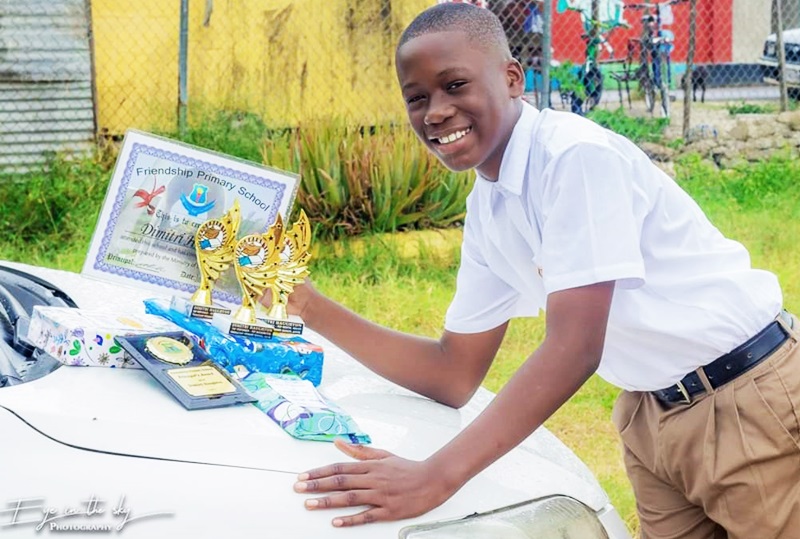 Dimitri Haughton, the highly eloquent and intelligent Deputy Head Boy at Friendship Primary School in the Spanish Town area of St Catherine, has attained the highest rank in all four subjects in the Primary Exit Profile (PEP).

The Ministry of Education has declared the 11-year-old student Highly Proficient in Science, Mathematics, Communications Task and Social Studies.

Dimitri, the top performer at his primary school, will attend Campion College – his first choice.

This is the first time in about a decade that Friendship Primary is having a student placed in a high-calibre traditional high school as Campion College, said Collington Powell, Principal.

“It is indeed a feather in our collective cap as it brings the school further into sharp focus that it is indeed capable of producing high calibre students,” he told The Beacon.

Powell continued: “I’ve personally watched Dimitri grow over the years, and believe firmly that he is capable of being very successful in his chosen vocation. I am very excited to have named him the 2019 Principal awardee.”

Dimitri, whose class teacher is Oliveen Scott, also received various awards during his school’s graduation ceremony. He was a member of the Schools’ Challenge Quiz team at Friendship Primary.

Dimitri, a resident of Fraser’s Content in St Catherine, expressed hope that his achievement will inspire other students – especially at Friendship Primary.

“I would like them to learn that hard work pays off and success doesn’t come by just thinking, but by hard work,” he said. “I am very proud of myself because I worked really hard.”

Dimitri hopes that his schoolmates and other students who were not placed at traditional high schools will not feel downhearted.

“It doesn’t matter which school you attend, you can still achieve greatness because in the schools they teach the same curriculum,” he said.

Dimitri, who intends to become a Chief Executive Officer of a company, said he is particularly enthusiastic about Math. “I love to handle money and it’s a part of business; I love business and Math,” he said.

His mother, Kimone Allen, in the meantime, told The Beacon that she is not surprised that her only child did well in PEP, considering that he has been on his school’s Honour Roll.

“I feel very very proud even though we expected all of this from Dimitri. But, seeing it come to reality, it is just a wow. Dimitri always has been doing well from Grade One,” the mother said while noting that the young achiever also gets superb support from his father, Vegard Haughton.