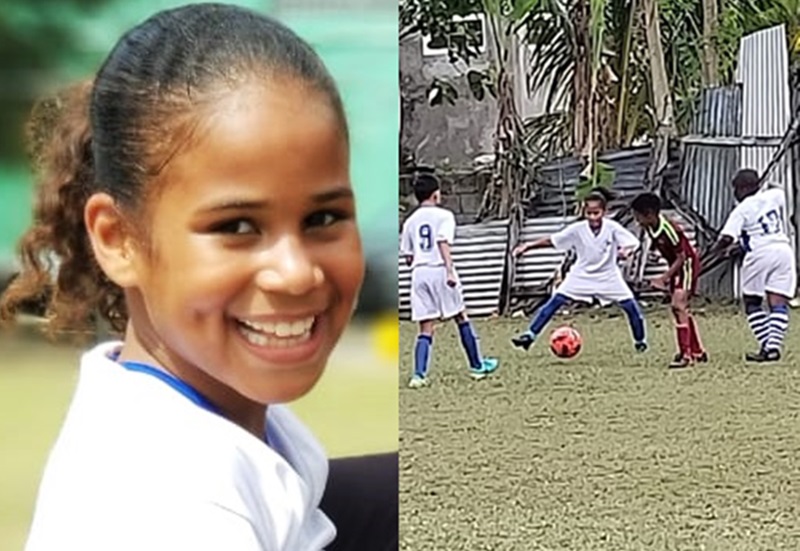 Khiyanna Jarrett does not want other girls to face the tackles she encountered in trying to secure a spot on her school’s football team, which comprised only males until recently.

“I am happy and extremely proud that I am the first and only girl on my school’s football team.”

Jarrett, who has been playing football for less than a year at her school, told The Beacon that she likes the male-dominated sport because it is exciting, intense, and it keeps her fit.

“I also love being part of a team that has only boys; the other teams are always shocked to see a girl on a team. Girl power!” added Jarrett.

Her mother, Barbie Khan-Nembhard, is happy that her daughter is helping to break the proverbial glass-ceiling at this tender age.

She recalled her child being told ‘no’ on numerous occasions when she tried to join her school’s football team.

“I am extremely proud of my daughter because she is the first and only girl to make the team!” the mother declared. “She has been a precocious child, and I am quite pleased that the coach of Mount Alvernia Prep realized her skill and passion for the game – and allowed her to be a part of the football team.”

The mother added that she feels a ‘deep sense of fulfillment and awe’ seeing how Jarrett interacts with the opposing teams as well as her team-mates.

Jarrett, who said she is likely to follow her football passion into adulthood, is also eyeing a career as a supermodel.