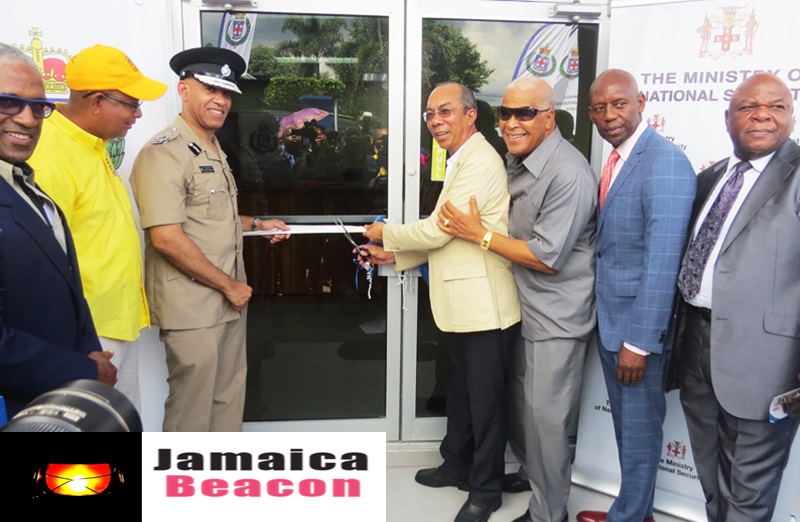 Several residents and visitors today descended on central Lluidas Vale, St Catherine, to witness the official opening of the brand new Shady Grove Police Station, which was completed at a cost of approximately $24.5 million.

The project, amid delays, was done within a two-year period by the Jamaica Constabulary Force (JCF) and the National Housing Trust (NHT).

In relation to the scope of work, Senior General Manager at the NHT, Donald Moore, told the audience: “The activities undertaken here at Shady Grove included the demolition of the old structure, redesign and construction of a brand new building, fencing of the premises, and the paving of the parking area.

“The new station has been outfitted with barracks, a kitchen, wash area, upgraded cell facilities for those who are unfortunate to have to spend some time there, an armoury, a reception area, visitors rest rooms and much-needed recreational space,” Moore added.

He admitted that there were delays in having the project completed.

“The project, which commenced in February 2017, was completed two years later in January 2019 at a cost of approximately $24.5 million… The delays were significantly due to the high level of rainfall in the area during the period of construction,” Moore said.

He further stated that he is pleased with the work undertaken, adding that all efforts should be made to ensure the upkeep of the investment.

The security minister, Dr Horace Chang, in the meantime, said he expects the police and residents to both enjoy the benefits of having a new and improved police station.

He added: “We experienced what at times appeared to have been some insurmountable challenges and delays [during construction of the station], but here we are… The work undertaken was extensive; it was rebuilding the entire structure.”

“But what is more critical [is that] it reflects our intent to convey to the police that we want to provide them with quality working environment, and also to citizens of the community that we consider it important for them to have a police station that they can feel proud about and can go there and feel comfortable speaking to the police officers,” the security minister said.

He also thanked the education ministry for allowing the police to use the principal’s cottage at LLuidas Vale Primary School while the new station was being built.

Commissioner of Police, Major General Antony Anderson, in the meantime, implored his officers in Lluidas Vale to provide the best possible service to residents.

“It is not just for the officers; it is for the people, so it is available for you [residents]. Don’t be resistant or shy about coming in [and] engaging the officers. For our officers, let’s provide the best possible service we can to this community,” he added.

“Although Lluidas Vale is not know as a hotbed of criminal activity…no one wants to set up shop or take up residence in an area without the assurance of proper security, and so this police station is welcomed indeed. The station will, no doubt, also provide assistance to other police facilities near here… I encourage all the officers here to be disciplined, focused and fair in carrying out their duties and to display conduct that is beyond reproach,” he said.

The new Shady Grove Police Station, though officially opened today, has been occupied by police officers since 11 January 2019.

Since they moved in, various failed attempts were made to have the facility officially opened.

It, however, didn’t happen until today.

A number of residents also descended on the station compound to bask in what was a historic moment for the rural community.

Here are some photo highlights:

God will give all murder victims justice, pastor warns criminals

Man arrested after murder with board