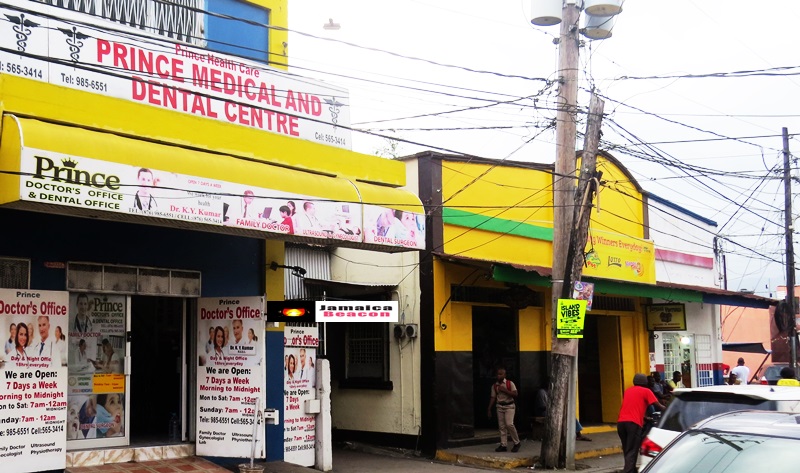 A medical doctor yesterday resumed operation on King Street in Linstead, St Catherine, after spending a week at the University Hospital of the West Indies where he was nursing a severe chop wound inflicted while he treated patients at his office last week Monday morning, June 3.

Dr K. Y. Kumar showed up for work with a relatively huge elastoplast covering the area from his elbow joint to the fingertips on his left hand.

Beneath the elastoplast are two virtually severed fingers (index and middle), which now bear at least 30 stitches and three pins.

Dr Kumar said he faced excruciating pains, but he is happy to again be in office, using virtually his right hand alone in treating some of the 25,000 patients he amassed over the 16 years he has been in Jamaica.

The India native has been operating on King Street for some 10 years.

His most vicious visitor, who did the chopping, is alleged to have mental issues.

He is still on the run, according to the communications arm of the Jamaica Constabulary Force (JCF).

The Linstead Police, in the meantime, are being accused of not doing enough to apprehend the accused, who allegedly has a reputation of attacking people.

The law enforcers, up to yesterday, were also yet to collect a signed statement from Dr Kumar, who stated that his lawyer has advised him not to comment publicly on the case.

The Beacon has been told that Dr Kumar was outside his office at Prince Medical last week Monday morning, and a plumber was working inside the building.

The accused showed up and requested to see the plumber.

The plumber reportedly said he does not know the man who had come to see him.

After that information was relayed to the accused, an argument reportedly developed between him and Dr Kumar.

It is alleged that the man brandished a knife and later left the area.

He reportedly returned shortly afterwards with a machete, stepped into Dr Kumar’s reception area, passed the female receptionist and waiting patients, entered Dr Kumar’s office, and started to chop at the doctor.

With death flashing before his eyes, Dr Kumar grabbed a spoon that was in his office and used it in his attempt to stave off the chopper.

The Beacon has been told that it was the spoon that saved the doctor’s life.

Dr Kumar later visited Linstead Public Hospital where he spent a few hours before he went to the University Hospital of the West Indies.

It’s not the first time that Dr Kumar is being attacked at the current location on King Street.

It is alleged that he was assaulted outside his office two years ago; his office was almost robbed in December last year.

When The Beacon visited Dr Kumar’s office yesterday, there was no security guard on duty there, and the building was wide open to anyone walking off the bustling King Street.

2 men to spend life in prison for 6 murders