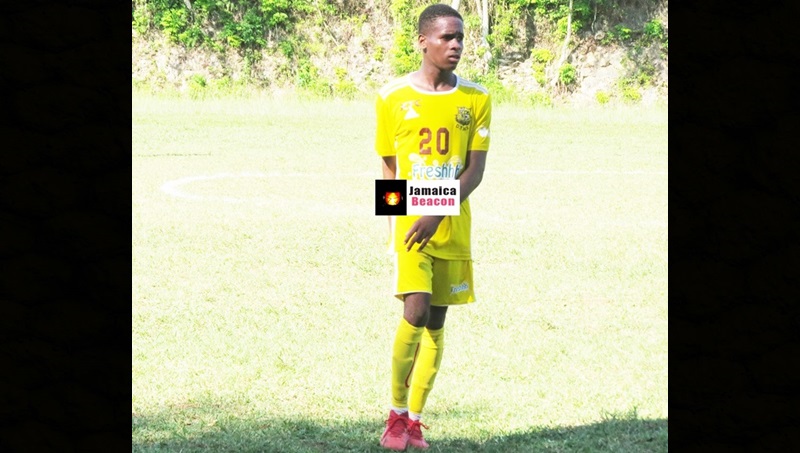 Rojia Layne didn’t score any goal this season until yesterday, when he rattled the net on two occasions to send his team – Dinthill Technical High, into the final of the ISSA|WATA daCosta Cup Football Competition.

He scored in the third and 73rd minutes of play to steer the St Catherine-based Dinthill to a 2-1 win over Cornwall College at Montego Bay Sports Complex last evening, November 13.

“It is a great great feeling. Those are my two first goals for the season,” Layne told The Beacon amid laughter. “All the people who have been behind us from the start to the end, I thank them very much.”

Layne, who plays forward and right wing, stated that he never doubted his ability to contribute significantly to his team’s success.

“It takes a lot of hard work and determination,” he added.

The young resident of Angels in the Spanish Town area of St Catherine, in the meantime, is a past student of Crescent Primary School and Enid Bennett High in Bog Walk.

He transferred to Dinthill Technical, and is now an eleventh grader there.

“I have been playing for Dinthill two years now; I played last year and I am playing this year,” he told The Beacon.

Layne said he wants to become a police officer, but he is not ruling out the possibility of a career as an international football player.

“If I can further my career in football, I will,” he said.

He also stated that his favourite football players are the legendary Cristiano Ronaldo and Lionel Messi.

Layne is optimistic that he will put on another stellar performance on November 30 when his side returns to Montego Bay to tackle Clarendon College in the final.

“I am going to work my heart out for my whole team, and make sure that they come out successful in the end,” Layne declared.

He continued: “With hard work, discipline, and focus, we can beat Clarendon College. We were at the bottom of the table [for much of the first round] and now we are at the top. It is a blessed feeling. Father is showing us a light that we can do it; this is our year [and] so we are just going to take it without turning back.”