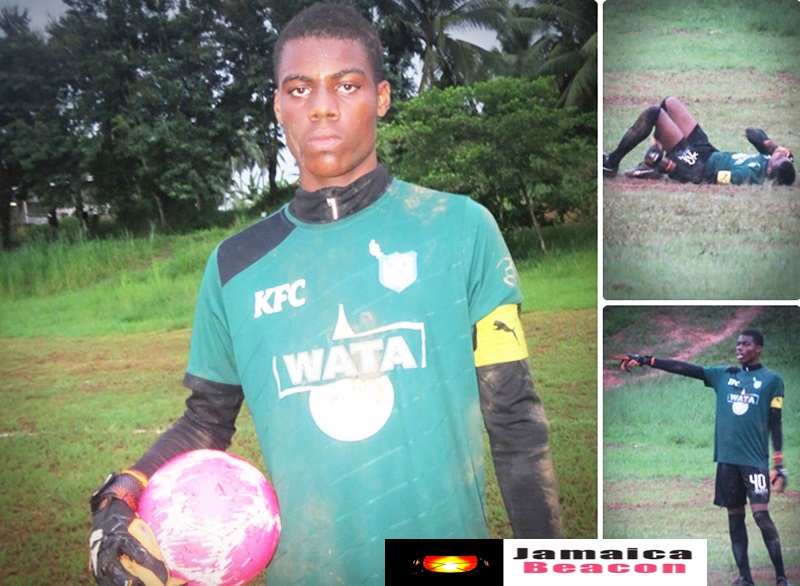 Carlos Robinson – the goalie with the safe pair of hands

Carlos Robinson did a lot of catching at his school on Saturday; this as he blocked Charlemont High School from scoring more goals in its encounter with McGrath High.

Both sides ended the match 2-2, but it could have been a worse outcome for McGrath, leader of Zone K in the ISSA/WATA daCosta Cup Football Competition.

McGrath conceded four goals so far in the five matches it played – the lowest number of goals conceded by any team in the four-squad zone. The school, in the meantime, scored nine goals.

Robinson, Captain of the team, became fascinated with football at nine years old.

He told The Beacon that he has been safeguarding the net since age 11.

He is now a 17-year-old sixth form student at McGrath High in Linstead, St Catherine, who previously attended York Street Primary – also in the Linstead area.

Robinson said he has seven CXC subjects under his belt, adding that he intends to become a soldier or a professional footballer.

He is a big fan of Lionel Messi, an iconic Argentina forward.

“Football is a good game to take up,” Robinson posited. “You get a lot of highlights, and there is opportunity to get to the upper stage of the game.”

The coach of McGrath High School, Jermaine Thomas, told The Beacon that Robinson is a promising player.

“He has been doing very very well,” the coach explained, adding: “We only conceded [four] goals all season – and we have been conceding some silly ones, but such is football. He has been doing well; he definitely has a very safe pair of hands and that has been paying the dividends.”