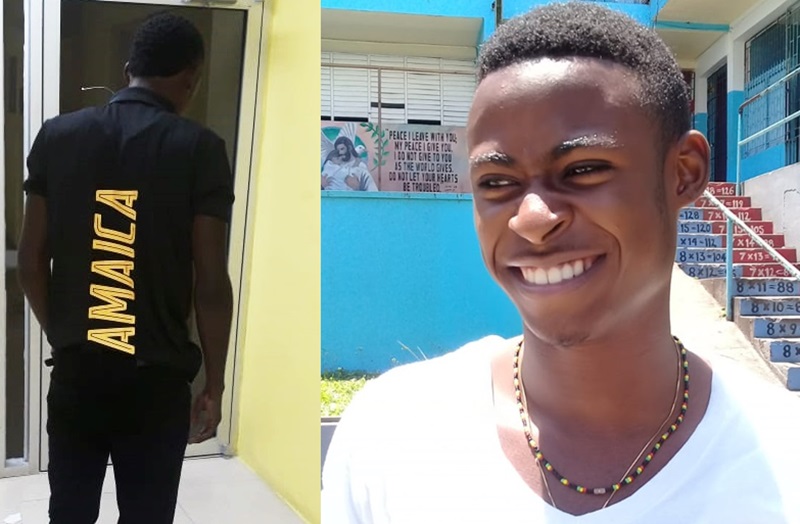 Donned in a team ‘Jamaica’ outfit, the promising Tyrice Taylor left for the Cayman Islands today to represent his native land in athletics for the first time.

It is a dream come true for the schoolboy, whose feats so far have been attained mainly in the colours of his school – Enid Bennett High, located in Bog Walk, St Catherine.

“I want to go and represent my country and come out victorious,” the resident of Time and Patience in Linstead, St Catherine, told The Beacon in an exclusive interview. “It is a great feeling to represent Jamaica, and I just want to show that our country can be good in the 800 Metres as in sprinting.”

Taylor earned his spot on the 80-member national team after beating a highly competitive field at the CARIFTA trials this month inside the National Stadium, Kingston.

Prior to that, he threw down the gauntlet at the Digicel Grand Prix finals last month, clocking a personal best of 1:48.85 seconds, almost shattering the record of 1:48.84, which was set by Sherwin Burgess in 1987.

Taylor said he intends to continue matching speed in the 800 Metres, but only for now. “I am running the 800 now until I reach the pro when I can actually come down to the 400 Metres,” he disclosed.

The youngster’s eyes are fixed on athletics, but he is not ruling out the possibility of also becoming a soldier or a doctor.

“Sometimes you can fail at something you really love, and so you have to have a plan ‘B’ in case anything happens,” he told The Beacon while advising athletes to maintain their spirit of perseverance.

“Be focused; be humble, and always train with confidence. Be proud of who you are,” he said.

Taylor, who said he started focusing on athletics in Grade Nine, stated that his favourite athletes are Christopher Taylor (not related) as well as South African sprinter Wayde van Niekerk.

His main caregiver is his grandmother, Icelyn Taylor. His mother is Tianny Hemmings; his father is deceased.

Taylor is cognizant that much is expected of him, especially when he wears the national colours.

He has many cheerleaders, including residents of his community and the entire Enid Bennett High School family – including the institution’s head coach, Jody Pusey.

Pusey told The Beacon that the athletics programme at Enid Bennett High has been improving, but the onus is ultimately on each athlete to display the discipline required to succeed.

Taylor is a disciplined one, he declared. “Mr Taylor is very humble; he is quiet; he is disciplined; he is hardworking and dedicated to what he is doing in terms of track and field.

“I definitely see him going far – even further than his own expectations. As you know, it is his first year in Class One, and he has contributed to the change in the middle distance event at this time in Jamaica and the Caribbean,” Pusey further posited.

He stated that he, along with the entire administrative and coaching team at Enid Bennett High, is anticipating a superb performance from Taylor at the 48th annual CARIFTA Games, which will run from April 20 to 22 inside the Truman Bodden Sports Complex, Cayman Islands.

“As a coach, I am expecting Tyrese to do his best, and we will see if he will actually get a personal best of 1:47 seconds,” Pusey said.

Acting Vice Principal at Enid Bennett High, Cecil Donald, is also among people brimming with optimism. “As the administrative staff, we would really like to wish Mr Taylor all the best. We have very high expectations, and we know he will continue to represent us and importantly continue to represent the country on the international stage. We are looking forward to big things from him,” the Acting Vice Principal further declared.