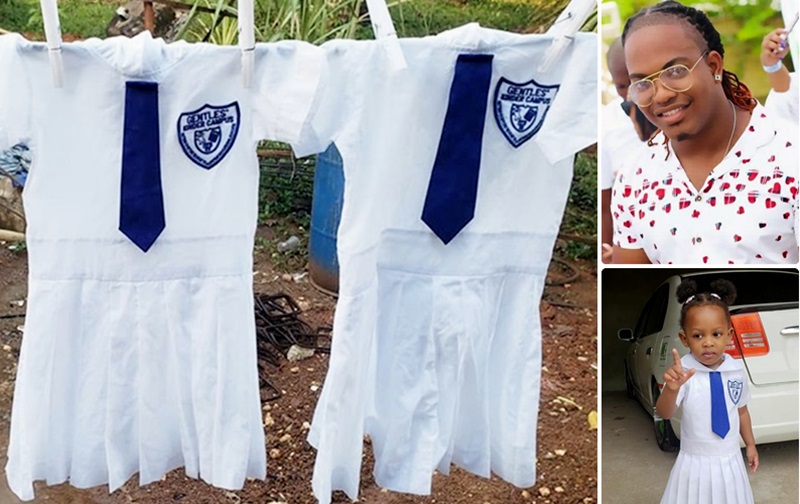 Lipton Buchanan from Linstead in St Catherine is a father worthy of emulation, although he never had a relationship with his dad.

His mother died when he was nine years old.

Now in his 30s, Lipton still attributes his interest in domestic chores to the lessons his mother inculcated in him at a tender age.

He, for example, recalls washing certain items of clothing before he was nine years old.

Lipton grew up with his siblings, who helped to mould him into a highly responsible man overall, and into a superb father for his only child Litonya, now two years old.

“I want my daughter to grow up knowing what life is, and how a man is supposed to treat her,” Lipton told The Beacon.

He declared that he is not afraid to wash – including the school uniform shown above, cook, take Litonya to and from school daily, and make another unsuccessful attempt to comb Litonya’s hair properly.

Lipton explained that his daughter’s mother, Kerry Wellington, is involved in the child’s life. However, she works in Kingston, and so leaves her home in Linstead before dawn and returns after nightfall each day.

Lipton, a telephone technician and camera installer in his hometown, is never hesitant when it comes to picking up the slack.

“It is a joy to do it,” he declared while lamenting the social ills resulting from poor parenting.

Lipton expressed hope that his doings and advocacy for proper parenting will be an inspiration to a generation of great fathers.

Kerry, in the meantime, told The Beacon that she is appreciative of the common-law-husband she has found, and the great father she has given to her daughter.

She noted that, amid the love and affection, Lipton is also a firm disciplinarian.

“He is so involved in his daughter’s life that I don’t have to update him on anything; he is always one step ahead,” Kerry further said.

She explained that, from all indications, Litonya enjoys her father’s company immensely.

“Once she is with her father, she is the happiest person… If she is away from him, I have to call him for her to speak with him. That’s how much she loves him,” Kerry further said.

By Horace Mills, Journalist (B.A. in Media and Communications; CARIMAC, University of the West Indies)

Aspiring prime minister attains 11 CXC subjects, all Grade Ones and ‘A’ profiles