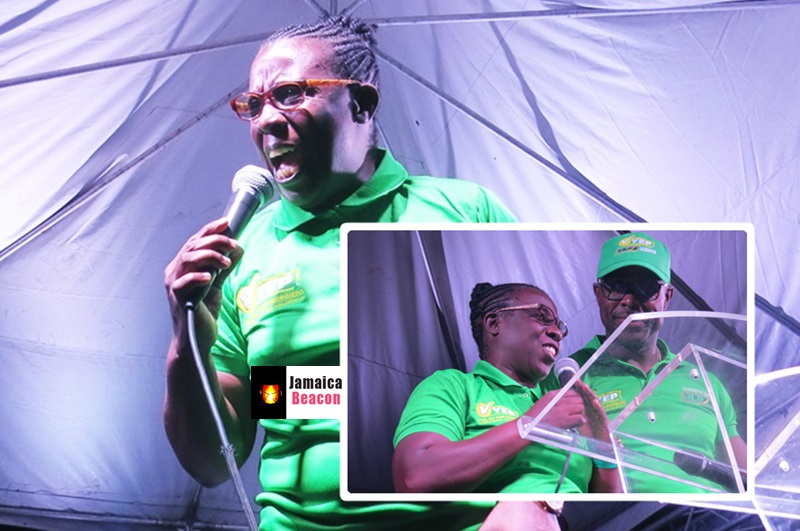 Councillor for the Palmers Cross Division in Clarendon, Carlene Benjamin, a self-proclaimed Christian, said her political opponents are devils, adding that members of the church should support the Jamaica Labour Party (JLP) in which she has membership.

She was speaking on Sunday night, November 3, during the Clarendon Northern constituency conference, held at Kellits Primary School.

The political firebrand, who got arguably the warmest reception on the night, said: “Some people a talk bout corruption inna politics; corruption inna church too… God vex with some of the something dem weh a gwaan inna church, and that’s why mi a call all a oonu, march out because wi a promote war against di old PNP dem cause dem a devil.”

Benjamin further indicated that she is happy more Christians are starting to see the ‘light’ although their pastors may be telling them not to get involved in politics.

“My church sisters and brothers of Croft’s Hill and Kellits and Bryans Hill – wherever you fall inna this constituency, follow backa me,” she appealed amid interludes of Gospel music.

Benjamin indicated that God is not pleased with the actions of the PNP – People’s National Party.

“God nuh love when yuh keep him people inna bondage; and that is why he get Moses to carry the children over the Red Sea,” the councillor declared.

She further stated that her party’s candidate in the constituency, Dwight Sibblies, has created miracle since being appoint as JLP candidate a year ago.

She indicated that, under the sitting Member of Parliament Horace Dalley, people have been suffering.

“Yuh a suffer now under the man weh deh yah – mi not even a call him name,” she said.