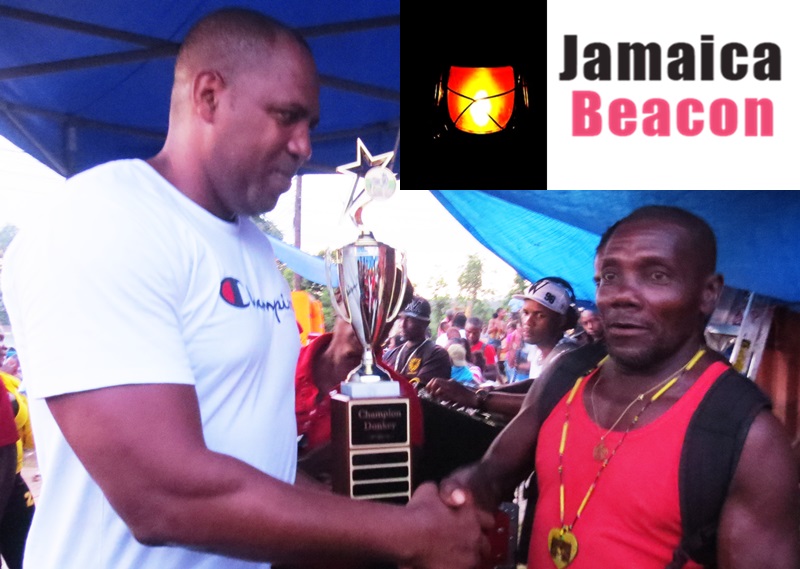 Sebert Henclewood, pictured above in red, usually keeps Donkey Taurus on his farm – away from large crowds and hot competitions.

On Independence Day this year, he opted to change things around, taking the animal to the annual Donkey Carnival held at San San square in Croft’s Hill, Clarendon.

He further stated that, even when he took Donkey Taurus to the crowded venue, he was not minded to register it for any of the races.

“Mi never really come fi race because mi nuh know if di donkey could race,” Sebert said, adding that he didn’t even have a rider.

Someone at the venue persuaded him to register the donkey. The rest is history.

Donkey Taurus, at the end of the carnival, was the overall winner.

His owner returned home with a trophy, $10,000 cash prize, and other winnings.

“This is a surprise to me because mi have mi donkey a bush everyday,” Sebert told the crowd while he collected his trophy and money.

Meanwhile, the winning donkey rider, Kirkland Jones, told The Beacon that he is excited about the win. He further stated that he has been riding donkeys for many years.

“Mi win some races today (Independence Day) and mi lose some, but mi win the final,” Jones noted.
Organizers of the Donkey Carnival, in the meantime, said it was a success.

Here are some of the photo highlights: