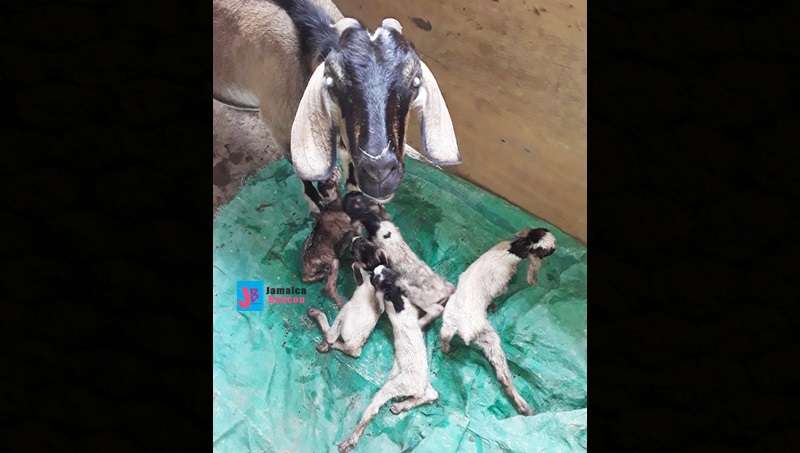 A second young farmer who lives in Clarendon Northern is this month celebrating after a goat gave birth to five kids all at once.

Johnann Jones, who lives in the Croft’s Hill area, watched in shock and merriment yesterday, April 25, as the goat he bought last year expelled four rams and a female kid. They are pictured above.

Johnann said one of the rams seems to lack energy, but a nipple bottle is being used to feed it milk replacer.

“All of them sucking good, except the puny one,” he disclosed. “The female one is the strongest and the biggest.”

Johnann further told The Beacon that, when he purchased the mother for $15,000 last year and brought it home, his father made fun of the meagreness of the animal. But 22-year-old farmer said he saw something in the goat that his father apparently didn’t see.

Johnann said the animal previously gave birth on three occasions, but this is the first time it is having five kids in one go.

The average number of kids born to a goat on any given occasion is said to be two.

That is the reason the five kids have become a spectacle in the rural community, Johnann declared amid laughter. “One lady who is 80 years old said she never si that in history; she said it is a sign and wonders and the Lord is near.”

Johnann also told The Beacon that the special gift has strengthened his confidence in farming – something he has been doing since he was a child.

He however became more immersed in it since he graduated from Kellits High School. “Mi plant sorel, cow peas, gungo, sweet potato, corn and those things,” added Johnann.

He said he adopted the love for farming from his parents – Israel and Adina Jones. “Mi bawn come si mi parents farming, so I say ‘let mi try it too’,” Johnann told The Beacon, adding that he has no regret.

He stated that a number of young people in his district are farmers. “Everybody actually have animals in my district,” Johnann bragged.

His community is two taxis away from the district of another young farmer, Kemron Nembhard, who previously said his goat gave birth to five kids in early April. He however stated that one died shortly after birth and so it was not captured in a photo he had submitted to The Beacon.