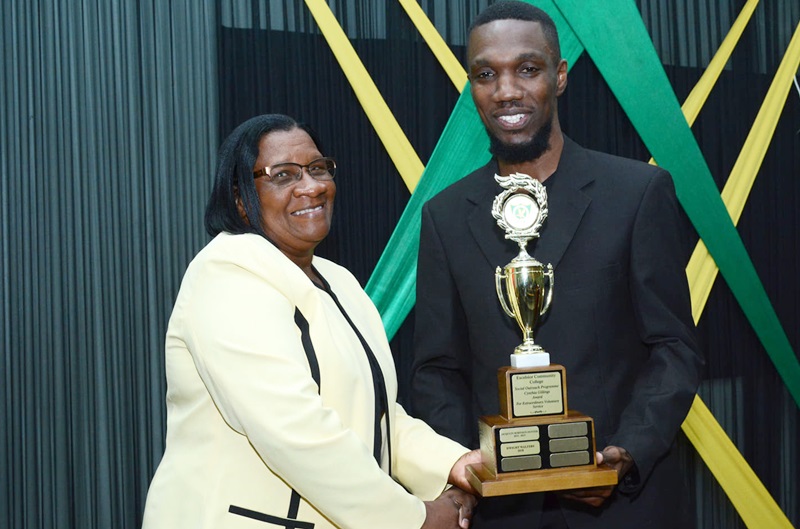 A youth who has found comfort in giving has ended up on the receiving end.

Dwight Walters, a 30-year-old native of Linstead in St Catherine, is this year’s recipient of the Cynthia Gillings Award for his sterling contribution to Excelsior Community College’s social outreach programme.

“I am elated, being that this award is given to stalwarts who never stop giving their time and efforts towards community services,” he told The Beacon after he received the award at the college on october 12.

Walters, who was nominated by Jacqueline Robinson Hunter, said his tendency to give is inspired by his mother, Margaret Martin. “My mother always wants to help in whatever way she can; this has been my motivation from a tender age – just sharing my time with others and seeing their bright smiles.”

Walters, an Administration Support Specialist with JN Foundation, holds a Bachelor’s of Science degree in Business and Entrepreneurial Studies from Excelsior Community College in Kingston.

He served as President of the Students Union at that college from 2015 to 2016.

The Charlemont High School past-student’s voluntary work, however, far exceeds that made to his former college.

Walters, over the years, has been heavily involved in various community organizations and projects in and out of his hometown.

The volunteer extraordinaire also spends a lot of time taking the message of peace and hope to young people in his capacity as a motivational speaker. Additionally, he volunteers with charity drives, Christmas treats, beach cleanups, and golden age homes. He also founded the Dwight Back To School Drive – a yearly initiative geared towards helping children from Linstead with school supplies.

“It is not about the accolades and awards; it is about doing good for your community and for others,” he declared. “If you are iffy about volunteering, start by finding an outreach project that aligns with your skillset. You will be amazed by how much you will learn and how excited you will become for your next project,” Walters further advised.